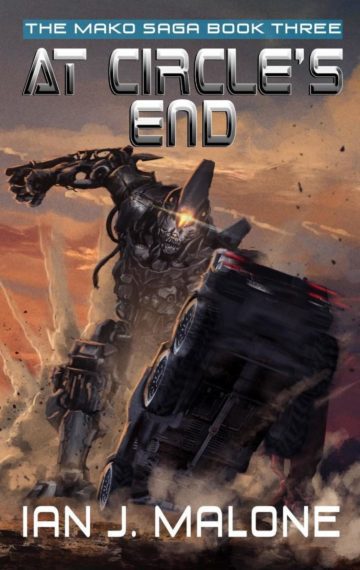 In the months since his disappearance, Danny Tucker has retreated to the darkest corners of Alystierian space, seeking intelligence on the Empire’s new chancellor, Alec Masterson. Backed by a crew of outcasts and fighting from the shadows as the enigmatic Rogue centurion, Danny will stop at nothing to achieve his mission—vengeance for the brutal murder of Madisyn Reynolds.

Still, try as he might, Danny can’t remain underground forever, and with sightings of the Rogue growing more frequent, Lee Summerston won’t rest until the lost Renegade is found. Meanwhile in the core, Aura stands on the brink of annihilation as Imperial forces draw ever closer to her shores.

In the end, scores will be settled and brothers will rise united…or they’ll all burn together.

“At Circle’s End” is the soaring climax to Ian J. Malone’s “The Mako Saga” and a heartfelt sendoff to sci-fi’s most beloved band of bar buddies turned intergalactic heroes of war.