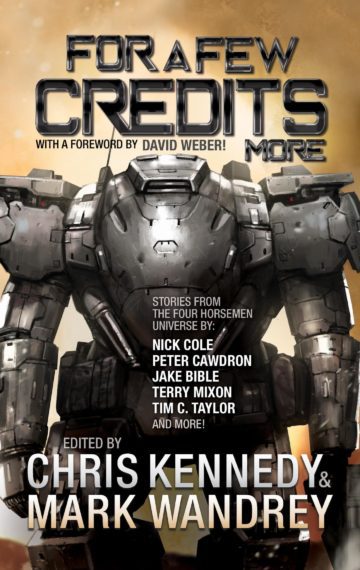 It’s the Twenty-Second Century. Humanity has taken its first steps into the galaxy, and we’ve found ourselves in a vast playground of alien races, environments, and cultures. As the newest players on the universal stage, though, our position is readily apparent—we’re at the bottom of the food chain.

Welcome back to the Four Horsemen universe, where only a willingness to fight and die for money separates Humans from the majority of the other races. While some of the stories inside deal with mercenaries, others introduce readers to the other guilds, organizations, and races that make up the landscape of the Four Horsemen universe, and many of them provide background information to the mainline novels. There’s even a new form of life to get acquainted with and a look at alien interaction at its youngest level!

Edited by bestselling authors and universe creators Mark Wandrey and Chris Kennedy, “For a Few Credits More” includes sixteen all-new stories in the Four Horsemen universe by a variety of bestselling authors—and some you may not have heard of…yet. It’s a world where you can get anything you want. Some things, though, are only available for a few credits more!