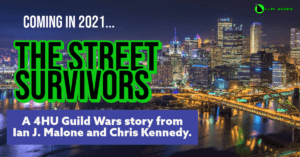 I am beyond thrilled to announce two very important things today.

Aptly titled The Street Survivors, this new story will serve as the direct sequel to 2018’s Free Bird Rising while continuing the stories which are currently being told in the 4HU Guild Wars series.

The Street Survivors by Ian J. Malone and Chris Kennedy is slated for worldwide release in 2021.

Stay tuned to the IJM newsletter and News Desk as more details unfold.